“If all the rich men in the world divided up

their money among themselves, there

wouldn’t be enough to go around.”

She was one of my first patients.  She had a severe case of rheumatoid arthritis.  There was an older doctor, older than me anyway, who practiced down the hall from me.  He also specialized in arthritis.  Maybe because he had lost his passion for medicine; maybe because he was in failing health, maybe because he was not a pleasant person all along, he did not treat his patients well.  As long as he was the only game in town he had a large practice.  When the word got around that there was another choice to his demeanor, many of his patients made the short walk down the hall to set up an appointment with me.

May was one of these people.  She came with Julia, her best friend, who also had RA.  My competitor had performed an abdominal exam on Julia, and after he was done he had scribbled the word “fatty” on her abdomen.  Yes, I know it’s hard to believe, but in those days doctors got away with a lot.  Julia was furious; she stormed out of the office and dragged May along with her, who was to be my rival’s next appointment.  I happened to have an empty slot at the time; May was seen promptly and courteously.  Julia set up a visit to come back when her medicine had to be refilled.

I took care of them for the next two years.  They always came together; a study in contrasts.  Julia was tall and mildly overweight; May was no more than five foot tall and slender.  Julia colored her hair a deep black; May allowed hers to be white.  Julia was loud and opinionated; May was quiet and reserved.  They lived in the neighborhood; they dressed modestly; there was nothing about their demeanor that made me think that they were anything but retired widows who had to scrimp and save in order to be able to make it.

The day came when May’s disease flared up.  In those days we used gold injections for the more severe cases.  I told May that the time had come to intensify her therapy.  She would need weekly injections for four months; she also had to have frequent urine and blood tests.  She showed me a look of concern.

“How much will these be?”

It would come to ten dollars a week; May’s Medicare should cover most of the lab studies.

“I can’t afford that.”
It’s your health.  Once we get you in remission the shots go to once a month.  Surely you can afford ten dollars a month to be pain-free.

“I’ll just have to get along without them.  I can’t come up with the money.”
At this point I got the impression that May was not done talking; that she was waiting for me to say something; that she really expected me to give her the shots for free.  Something in her expression…

I was about to say that I’d be glad to cover the cost of the injections when my nurse knocked on the door.  One of the hospital nurses needed to talk to me.

I excused myself and walked outside to answer the phone.  After I hung up I ran into Julia in the hallway; my nurse was escorting her into the next exam room.  I said hi, and was about to walk by her when she reached for my arm.
“Anything you want from Florida?”

Nothing I can think of.  Who’s going?

“I’m going with May.  We leave over the weekend.”
Who does the driving?

Staying for a few days?

“No; we stay for the whole month.”

Do you have friends that you stay with?

“We rent a hotel suite.”
How can May afford to fly to Florida and stay in a hotel for a month?  I couldn’t help but ask.

“May’s husband left her very well off.  He had sold his business, and there was a lot of insurance money.  She’s better off than I am.”

I felt my blood pressure rise a few points.  I wished Julia a nice trip, and I walked back into May’s exam room.  I produced the sternest look I could muster.

You’re starting your gold shots as soon as you come back from Florida.  And you’re going to pay for them.

She smiled, much like a child who has been caught with her hands in the cookie jar smiles.

“OK.”  No more pleas or arguments.

May received her injections.  She improved.  She died a peaceful death in her early nineties.  We never discussed money again.

Time and again, over the years, I have run into similar situations.  Wealthy people who ask me for discounted rates.  A millionaire businessman who repeatedly begged for free samples of his diabetes medicine, even after I explained to him that I’d prefer to keep the samples for those who were struggling.  People who drive expensive cars and refuse needed treatments because they felt they could not afford them.

As old as I am, I still don’t get it.  I’ve given up trying to understand, and I certainly don’t have the resources to do an in-depth financial analysis of my whole practice.  Most of the time I end up giving in, and I skip a charge, because I could not live with myself if I ended up failing to help someone needy.  But I admit, I always wonder if I’m dealing with another May… 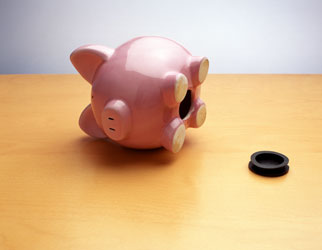