Skip to content
Dr. Francisco Garriga, M.D.
“Informed consent can be said to have been given based
upon a clear understanding of the facts…  Impairments to
reasoning and judgment (such as high levels of stress) may
make it impossible for someone to give informed consent…”
-From the Wikipedia article on Informed Consent
It had been a while since I’d seen her.  Her arthritis was doing very well with standard therapy.  One day she went for a routine mammogram; in what seemed to her to be the blink of an eye she was diagnosed with cancer, underwent surgery, received chemotherapy, and suffered through several radiation therapy treatments.
“It has been almost a year,” she told me.  “One of my friends who went through the same thing told me it would be the longest year of my life.  I shrugged her off; I figured how long could it take?  Now here I am; she was right.”
I missed you.  I hope all is going well.  About the only positive here is that the chemo usually controls the arthritis.  I bet you haven’t needed my medicine.
She nodded.
How are you doing?
She showed me her left chest wall.  There was a large radiation burn involving most of the upper chest.
How much pain are you having?
“It’s uncomfortable.  Hard to sleep.”
There was always something about her.  Smart; knowledgeable of her disease and its treatment.  Calm.  Cool.  One of these people that did what had to be done.  Now here she was, giving me the facts, almost reciting them.  Just another hassle that one has to go through.  I decided that, even though her joints were doing well, we needed to talk some more.
Tell me more about how it feels.
“The burn?”
The whole thing.  The cancer.  The chemo.  Your life turned upside down; your family worried…
“It’s not one thing.  Like you just said.  It’s so much; it takes over everything.”
And how.  Everyone being nice to you?  Docs and nurses treat you well?
“Yeah.”  Not very convincing.  “I mean, they all have done what they’re supposed to.  Other than the burn I think I’ve done well.  And he did warn me about that.”
Informed consent.  We have to warn you about the side effects.
“I know.  It’s just the way he went about it.  The skin burns.  They may burn my lungs.  I may get infections. They may burn my heart; I can come down with a bad heart in fifteen years.”
Her voice rises now.  Just a bit.
“Who cares what happens to me in fifteen years?  I have cancer!”
I smile.  I understand; he probably felt that he had to tell you.
“It’s just the way that he did it.  He sat in front of me with a piece of paper.  Looked me straight in the eye; then he began to read.  Like they read a criminal his rights, with no emotion.  I felt that I had done something wrong; that he wanted to punish me.”
Now come the tears.  A difficult problem.  She’s still under his care, yet clearly there has been a rift in their relationship.  I have to make sure that she understands that I know how she feels.  And I can’t say anything that will make him look incompetent or uncaring.
I’m sure that he felt that he was doing his job.  Maybe that’s the way that he was trained.  By an older mentor who did the same thing.  Maybe one of his colleagues was sued by an unhappy patient, and he feels that he needs to make the record crystal clear.  I wait a few seconds.
It’s just that the end result came out as cold and unfeeling.  I understand.  If it had been me I would have spent a few minutes getting to know you, and telling you that I was sorry about everything that you had been through.  Tell you about the two most common side effects, and offer to give you that piece of paper to take home and read it with time to think and write questions down.  For sure I would have given you a hug.  It seems to me that to you it may have felt that you were being hit while you were down.  What were you supposed to do?  Turn down a treatment that may save your life?
She smiled.  I can tell that she understands.  Her confidence renewed, she stood up and gave me a hug.  She agreed to send me an e mail any time that she felt she needed to vent.
The lawyers and ethicists demand informed consent, and for good reason.  Too many people were abused and neglected before medicine acknowledged the existence of basic human rights.  Yet, in the end, it all comes down to trust.
When I went for a technically complicated operation years ago the surgeon took fifteen minutes to explain to me what he was doing.  It felt like an hour, because he sat down; he did not appear to be in a rush; he had taken the time to find out who I was and what activities gave me pleasure.  When he was done he asked if I had any questions.  Of course not.  He could have told me that I needed to walk barefoot in the snow; I would have done it.
One human being reaching out for help; the other offers a hand.  This happens in medical offices millions of times every day, all over the world.  Yet so much depends on how we ask for the help, and the way in which assistance is provided.
Can I trust you with my body?  Will you listen?  Show me some love…
Pic: http://graphics8.nytimes.com/images/2009/07/30/health/chen_600.jpg 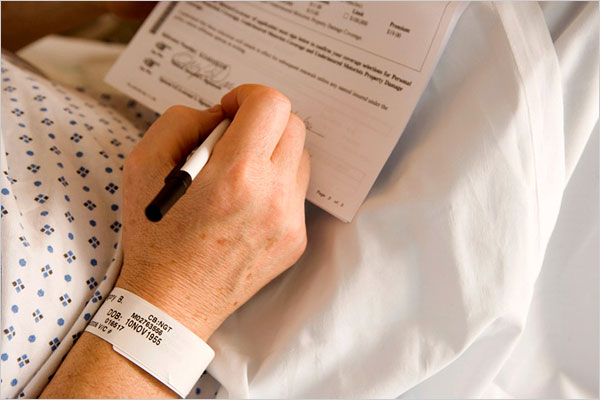