“She’s got a way about her

I don’t know what it is

But I know that I can’t live without her.

She’s got a smile that heals me

I don’t know why it is

But I have to laugh when she reveals me…”

I met her on the first day that I started private practice.  She worked in the office that I had chosen to work in.  I had numerous offers after I finished my training.  I decided to join a doctor whose cousin was my best friend during medical school.  All of the other places offered more money; some catered to upper class clientele and were considered prestigious.  There were better benefits, and more security, and teaching appointments elsewhere.  I picked the small office in the middle of a forgotten North County neighborhood.  What was I thinking?

After a week on the job I realized how smart and capable she was.  She became the “go-to” person whenever I felt that a phone call had to be made; a specimen had to be drawn; a life hung in the balance.  I urged her to go back to school; to get a degree.  She had a lot going on, including an unhappy marriage.  She would think about it.  The relationship with my partner didn’t work out.  This by itself could fill another blog; let’s just say that we had different styles.  I wanted to be more of a partner; he wanted full control and most of the money.  What was he thinking?

When I told him that I wanted to start my own practice he became furious.  He told all of his employees that he’d fire anyone who helped me in any way.  She took time off after work to teach me and my new staff all about setting up an office; billing; supplies; scheduling.  For no compensation.  At the risk of losing her job.  What was she thinking?

From day one my new practice blossomed, no small thanks to her training.  Three months later she showed up in my office in tears.  She had been fired because she had asked for a raise.  My former partner was concerned that if he gave her what she deserved other employees would want more.  He asked her to leave.  She had no job, and she needed the money.  Why would he get rid of his best employee; someone that he obviously would not be able to replace?

I told her that I had no job for her.  I was just starting out and had student and professional loans that seemed intimidating to a young person.  I offered to give her a half salary, no need to show up for work, until she found something else.  I was sure someone else would hire her soon, so I felt my commitment would be minimal.  Still, it was money that could be used to pay off loans.  Why did I do this?

Not only did she show up for work: she took over.  She streamlined the work flow.  With kindness and patience she made suggestions for the staff to improve.  The patients recognized her skills; they began to ask for her.  She told me that she loved her position and she stopped looking for another job.  She worked full hours for half pay.  My practice zoomed; money began to flow in.  When one of the full-time employees decided to leave, I heaved a sigh of relief.  I began to pay her a complete salary.  I gave her the raise that she had asked for, and then some.  I insisted that she had to go to school; I would pay tuition and books.  I didn’t have to do this; she didn’t have to accept.

She started out in community college, taking courses here and there to see what aroused her interest.  Soon after she finished a successful first semester she made the decision to leave her husband.  As if she finally knew what it was that she wanted to do with her life and her education.  When I asked her what she had decided to study she looked to the floor, in a shy, almost apologetic way.

Why is that a problem?  Why do you look down?

“Because it’s expensive, and you said that you would help.  I don’t want to burden you.”
No burden.  Look what you’ve done for me.  Of course my promise stands.

It was very expensive; the only available night courses were at the private university.  I could have used the money for other things.  Why didn’t I take the “out” she had offered me?

Time passed; life went on.  The practice kept growing, to the point where I had to hire a new doctor.  She was on her own and needed more money.  I offered to give her more work.  She took over all of the practice management.  Payroll.  Coordinating vacations.  Communicating with the accountants, and the insurers, and the health insurance companies.  She helped to collect past due bills.  She did almost all of the nurse work, and she went to school “full time” at night.  She kept improving, when other people would have been happy to settle for what they had.  Why?

Then there was this one particularly busy day.  Patients who had to be seen today were added on.  Busy hospital routine.  Many phone calls.  It all went off very well.  It was dark outside, and as I picked up my coat from the closet I noticed that she was at my desk (the only desk we had at the office), paying bills, filling out forms, calling patients with lab results, all of it done well, and with a smile.  I paused at the door, and I took stock of all of the “Whys” that I have outlined above.  It hit me; it became very clear; that this woman would do anything for me.  Yes, she was helping herself, but there was something about the way she did things that told me that she was special.  I walked up to the entrance to my office as she hung up after she had finished the last call of the day.  The checkbook was in front of her.  A pile of patient records was on her right.  A mountain of textbooks on her left; in a few minutes she had to run out of the office in order to make it to school on time.

I love you.  I really love you.

Her jaw dropped.  She was speechless.  I walked out.

Today it has been nearly thirty years since that evening.  As we come close to Thanksgiving and people make lists of everything they are thankful for, I think of all of the ways that life could have turned out differently for both of us.  Why things turned out the way they did I can’t explain.  I only know that every morning when I see her face I’m overwhelmed by gratitude that all of those twists and turns worked out the way they did.  I don’t need a day of thanks, because I celebrate it every day year round.

Happy Thanksgiving to all.

My best friend Phyl sparkles more than the lit up trees. 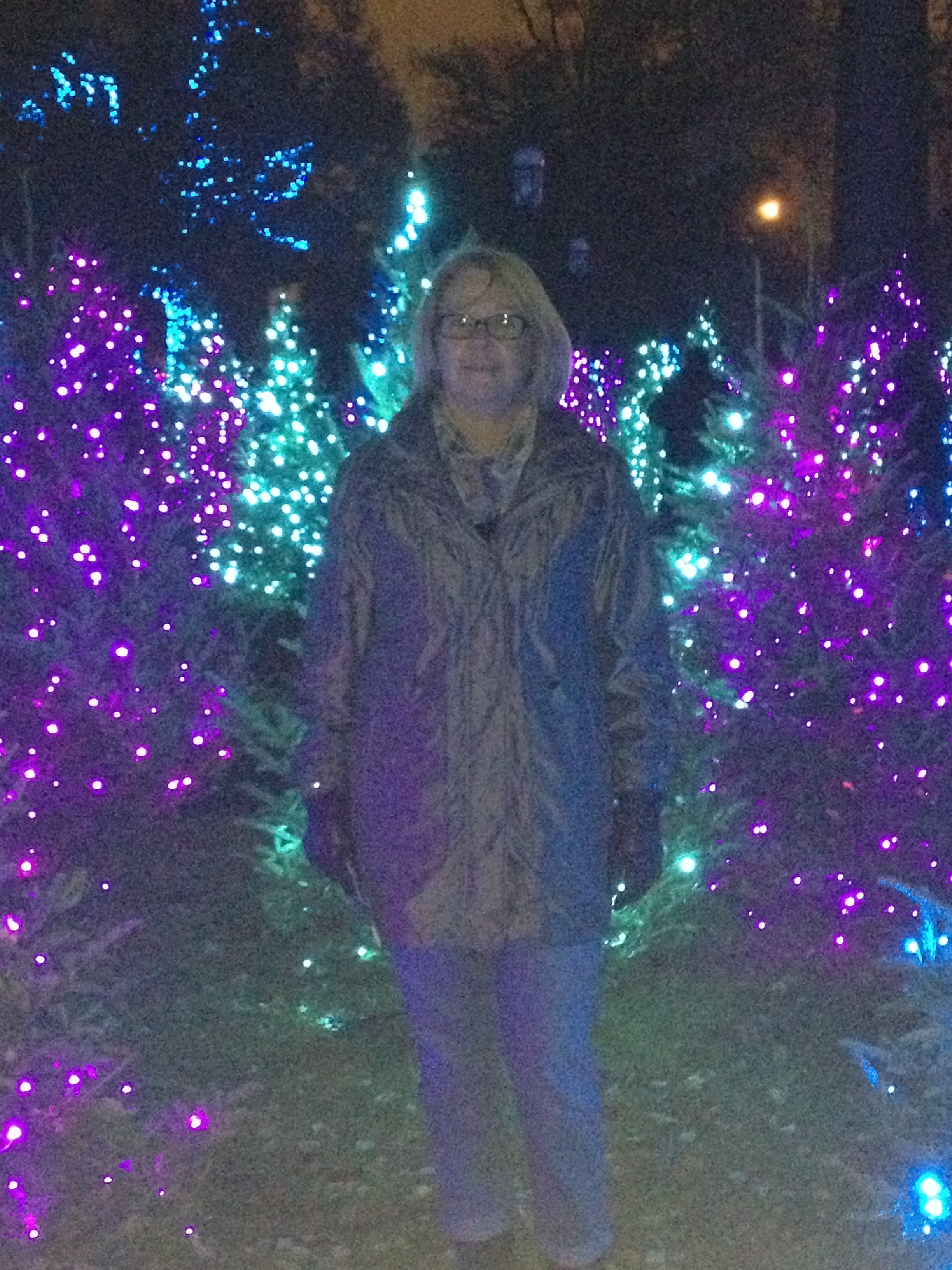 Tags: falling in love, finding a new path, going back to school, life after divorce, moving on, starting a new practice, starting over