“Every child comes with the message

that God is not yet discouraged of man.”

When he was born life did not hold much promise for him.  His mother used illegal drugs, maybe even during the pregnancy.  We know little or nothing of his father.  The state assumed custody shortly after birth, and he was transferred to Faith House, a place that took care of children in similar circumstances.  He was small, and sickly.  There were several hospital stays in his first year of life.  The odds were stacked against him.

A single mother who had three teenage daughters of her own volunteered at Faith House.  They took an interest in him, maybe because of his sweet disposition; maybe because he was so obviously in need of help.  They visited the place; frequently.  Soon they were allowed to take him to their home for the weekend.  A bond quickly developed.  The baby uttered shrieks of joy when either of them showed up to see him, and he cried for hours at a time when the time came for them to part.

His outlook began to improve.  The visits to the doctor became less frequent, although by no means were they rare.  The times with his new family stretched out.  Eventually they were allowed to take him to his new home on a permanent basis.  A formal adoption followed.

Everyone pitched in.  Doctors agreed to see him for less than their normal fees.  One of the elite West County elementary schools took him in as a scholarship student.  There was always someone available to take him wherever he needed to be, or just sit and play with him, or hug him.

This massive investment in time and energy did not go unrewarded.  It was clear to everyone who came in contact with him that this was a special child.  He was sweet; kind; generous; unselfish.  He loved his school.  They spent a lot of time figuring out how best to teach him, and again, he made it worth their while.  He progressed along with all of his classmates.  At times he excelled.

There were hints of greatness.  When he was seven one of his sisters was driving him to a function.  They were late.  The gentleman who was driving the car ahead of them went at a very slow pace.  She became impatient; she made a remark as to how annoying this slow driver had become to her.

An indication that the child was beginning to teach the adults that surrounded him.

The visits to the doctor became even more infrequent.  He grew stronger, and faster.  By that I mean to say that his family found out that he was an athlete.  He could run like the wind.  Every game seemed to come easy to him.  He enjoyed the discipline of practice; the commitment to teammates.  It seemed like overnight he developed a man’s body.  He was a jock.

For junior high he enrolled in a demanding school, both in sports and academics.  Every year he did better than the year before in both endeavors.  He did not need to be reminded of homework and other commitments as frequently.  His teachers gave him more responsibility.  His mother began to receive letters of commendation.  Awards became the expected outcomes.

His sisters finished their educations; got good jobs; got married; moved into their own homes.  He acquired three brothers who became half fathers to him.  Now he had four homes; four places where he could walk into the kitchen, open a pantry, and serve himself to whatever he wanted.  He was comfortable in all of them.

Today, this child who could have been easily forgotten by society is an outstanding young man.  He does well in football, and track, and basketball.  He consistently brings home grades above a 3.7 average.  Every day he receives letters from elite colleges who would like for him to apply; places that will likely offer him scholarships.  He has qualified to join a leadership program.  He has already traveled to Washington DC to familiarize himself with the legislative process.

Most important: he continues to be a sweet, kind, generous, loving human being.  He comes for dinner to my house every Sunday, and even though he’s not legally my son I look at him the same way I look at my daughters, who happen to be his sisters.

There were so many things that could have gone wrong…  It would have been so easy to give up on him; after all, why should society have expected anything out of this situation?

It takes a village.  No; it takes a country.

I read the newspapers.  I see where our legislators do not want to expand Medicaid coverage.  The same public service that made it possible for this young man to survive, and thrive.

Faith House no longer exists.  I’m sure that they did not have enough money.  The same place that provided a warm and safe environment for him, when he needed it the most.

We complain about taxes, and big government.  Yet it was this money that has allowed this young man to become a potential superstar; someone who will pay a lot of taxes in the future so that other people just like him can make a success of their lives.

Our president has spoken of the need to provide the same opportunities that this young man has had to every single child who’s born in this country.  A majority of people don’t feel like this will be money well spent.  The proposal has gone nowhere.

This Christmas, remember your blessings.  Keep in mind that they are not things that are handed to you.  Instead they are opportunities that life has given you to do the right thing.  Blessings are not winning lottery tickets; they are commitments that will suck endless hours of hard work out of you; needs that will drain you of money you would like to spend otherwise.

Look at your children.  Think about how happy they make you; how glad you are that they are part of your life.  How blessed you are.

Somewhere, close to you, there is a child who would love to have just a tiny part of what you have to offer.  A warm home.  A clean, effective, safe school.  A blessing waiting to happen.  What will you do about this?  What would Jesus do? 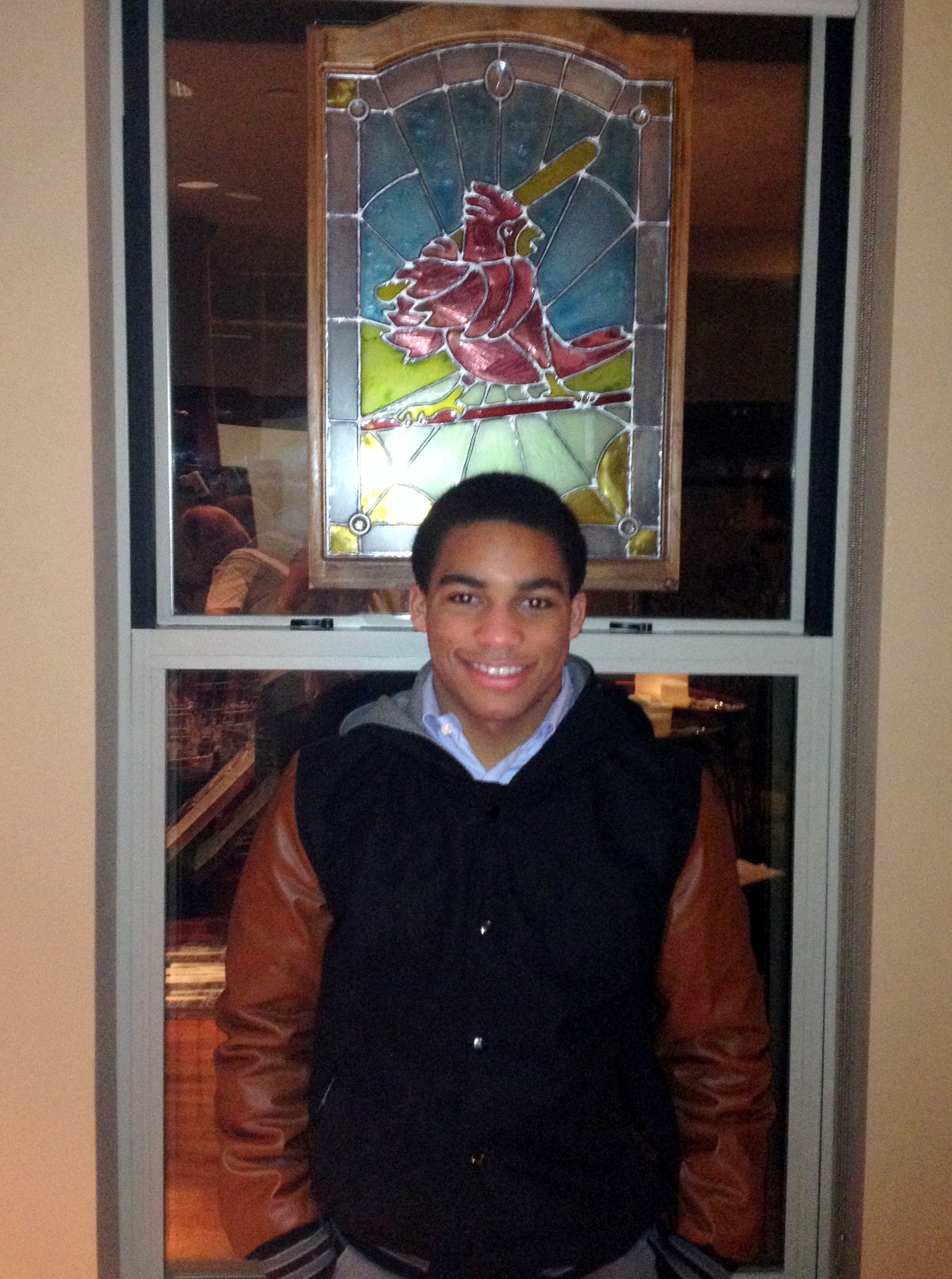 Aaron Garriga poses in front of the Redbird that hangs in my living room.

Tags: adoption, charity, faith, living up to your potential, optimism, positive role model, sacrifice for the good of others