him who receives it; it is ineffective besides.  Neither shame nor

physical pain have any other effect than a hardening one.”

I met him when I was in the Navy. I have very little training in pediatrics, and I felt not quite competent in handling the more complicated cases. There was a doctor at the dispensary who was a year ahead of me. He had extensive training in pediatrics and he usually took care of the difficult kids. A few months before his tour of duty was up he took me under his wing and he taught me some of the basics.

“None of the other guys wants to bother.  It will have to be you.”  I don’t recall that I ever agreed to perform this chore.  But once he started to teach me I was stuck, and I found out that I enjoyed it.

He was particularly interested in taking care of children with hyperactivity. In those days, there was very poor understanding of the basic physiology of what went wrong with these children. A few doctors were beginning to use medication for treatment, but this was by no means a uniform protocol.

When my friend left the dispensary I became the hyperactivity resource. This is when I met Jeffrey. His mother was very concerned about him. He was doing poorly in school. None of his teachers wanted to deal with him. He had been to the principal’s office many times. To make matters much worse, his father was a strict disciplinarian. He was in his 30s, and he had made it to Chief at such an early age because of his adherence to rigid standards. He could not understand why his son was not compliant with his orders.

The first interview went poorly. Thirty seconds after he walked into the exam room Jeffrey had climbed just about everywhere. He looked into the pockets of my white gown. He turned the faucet on and off several times. He constantly interrupted his mother when she was trying to give me a history. In other words, he was a typical hyperactive child. It was clear that his mother was at her wit’s end. She loved the child, but she did not have any idea of how to deal with him.  She was caught in the middle, between her need to allow her husband to be the “man of the house” and her almost desperate desire to avoid the frequent spankings and “timeouts” that her husband felt were necessary.

I scheduled an appointment to bring his father in. I also asked his mother to talk to the school principal to see if he would be willing to meet with me. This was clearly above and beyond what was normally done for these children, but there was something about Jeffrey that made me feel that he was worth the extra concern.

At first Jeffrey’s father was not very helpful. His whole life consisted of being on time and following orders. In his mind, there was only one way to be successful. It took me a few minutes to realize that this conversation would not be exclusively about Jeffrey. I decided to ask his father about his background and his education.

In another five minutes it became clear that Jeffrey’s father had had similar problems when he was growing up. His own father had beaten and disciplined him into submission.

Tell me how it felt.

How it feels to have the only man you love, the one person you depend the most in the whole world, to beat you and punish you frequently.

There was a long silence.

You think so?  Could it have been another way?  Maybe there were times that the punishment was too harsh?

That answer came awfully fast.  I want you to think about it for a minute.  How did it feel to be hurt so badly for being the way you were born?  You weren’t trying to upset your dad, were you?

An even longer silence.

I know you’ve done well.  You should be proud.  I just find it hard to believe that you had to have success beat into you.  I think you would have done just as well with kinder words.  Maybe you wouldn’t be so angry at your child now if you had been raised differently.

I know you do.  But it seems to me that there are times, many times, that he makes you angry.

“He won’t mind…”
Neither did you.  And see how well you’ve turned out.  I think that you can get him to that point without the beatings.

He begins to sob.  An unusual sight: the large, strong, ready for combat military man making a connection with his inner child.  I see that he’s beginning to question the premise that led to his violent upbringing.

“The teachers; the principal; the neighbors; everyone complains about him.”

I think that he’s a good kid.  You know that he has a lot of potential.  Give me a chance to work with him.

I’ll talk to the people at school.  I just want the beatings to stop.

He looked to the floor.  He nodded.

I went to visit Jeffrey’s school.  I had a harder time with the principal than I did with his dad.  After listening to him tell me, for several minutes, how important it was for no child to be allowed to get away with breaking the rules, I could not resist the temptation to ask.

Are you retired military?

“How did you guess?”

Just a lucky stab.  I want to start Jeffrey on medicine.  I will need the teacher, or a school nurse, to give him a dose at noon.  I want you to relax on his discipline for the next month, until we get the right dose.  I’ll come back in a month if he does not improve.

He gave me a strange look; obviously not many people had ever told him what they wanted done.  I figured if I acted as a superior officer he would be more likely to say “Yes, sir” and follow my guidelines without thinking too much.  My hunch worked.

Jeffrey started on medicine the following week.  I called his mom ten days later.  She was ecstatic.  There had been no more beatings, and there were no complaints from school.  Jeffrey was beginning to discuss some of the things that happened in class when he got home.

Months went by.  When my tour of duty was up Jeffrey’s mom made an appointment to come see me to say good-bye.  Despite the fact that it was a school day, Jeffrey came along.  His dad was on deployment, but they told me that he sent his regards.

After we complimented him on his progress I stood up to give him a hug.  He handed me a small box.  In it was a figure of a doctor wearing a head mirror.  In it someone had written “Dr. Garriga” in black ink.  The small figurine still hangs in my exam room.

I see many adults who were probably like Jeffrey when they were kids.  Never did well in school; never managed to learn as fast as the other kids.  Labeled lazy, or spaced out, or disruptive.  Most of them want to beat their children the same way they were beaten when they were young.  None of them realize that this is not the only way.  None of them will ever know how much easier their lives would have been had someone taken the time to listen. 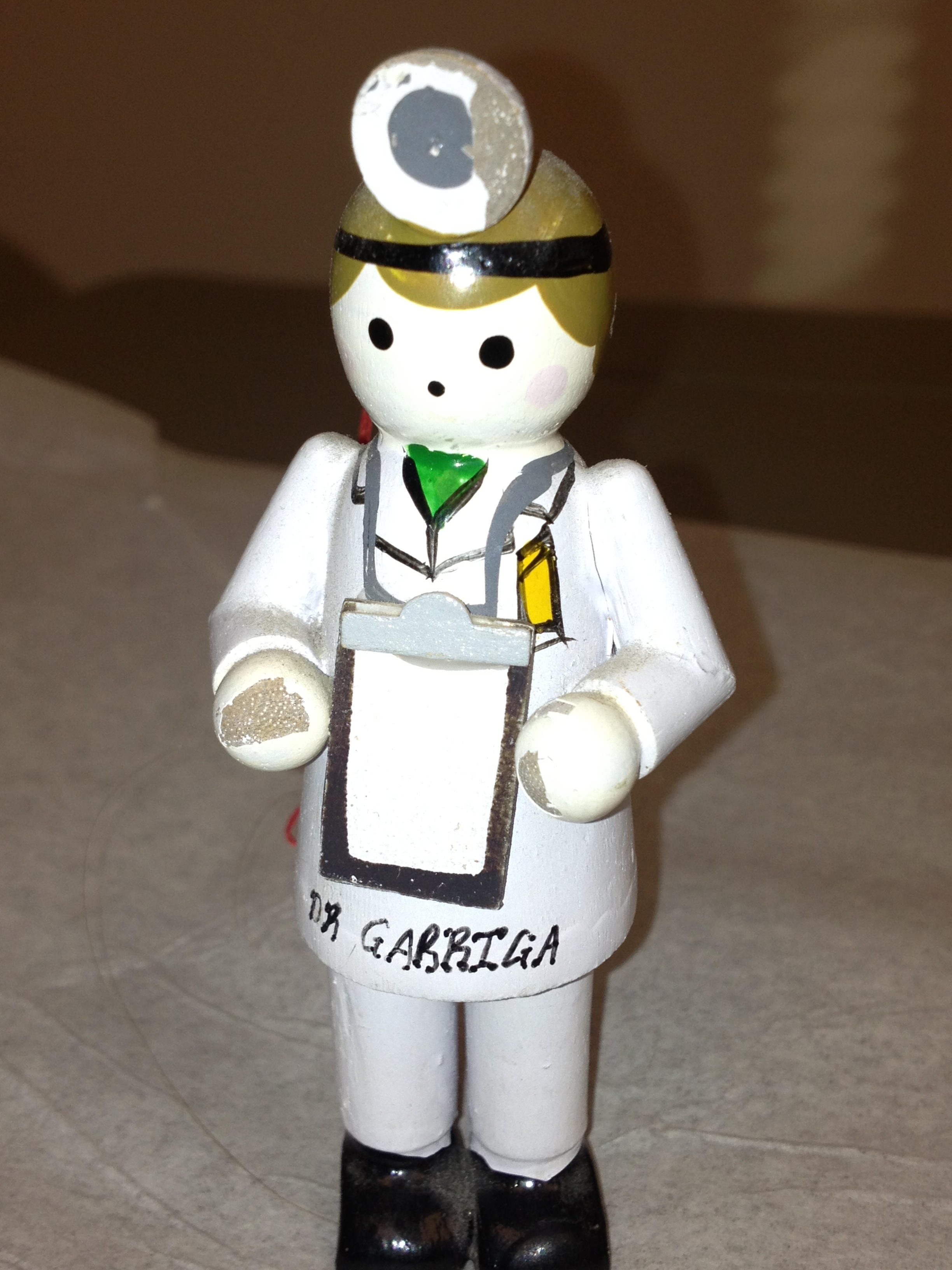 Minimum Wage and Getting to First Base