Last week I wrote about the enormous responsibility that we take on when we accept another couple’s child as a temporary member of our household.  We do so without thinking about it much, mostly to please our children and partly because we feel obligated that other couples do the same for our kids.  The response to last week’s blog was excellent.  I have chosen to add another instance of distress that was caused by one of my daughter’s friends.

It was late in grade school; somewhere around grade 5.  My daughter had asked for a typical party for those days: the cardboard pizza place with all of the games that threatened to bankrupt the family, followed by a sleepover punctuated by the rental of a movie appropriate for their age.

The things we do for our kids.  I hate the cardboard pizza.  I hate to set limits on the behavior of children that don’t belong to me.  I always start the evening by saying that each child will get five dollars of tokens to play with the machines.  Of course it takes the average child ten minutes to go through this stash.  They come back begging for more; I realize that the party cannot possibly last only ten minutes (the cardboard cake is not ready, and the reusable party room where the cake is eaten is occupied by another group).  I come up with more tokens; I tell the first child who asks for more that I’m only giving more to her; that they should not tell anyone else that they got more.

Thirty seconds later five girls are tugging at my sleeves.

“Nina told us that you had more tokens.”

I give in.  I begin to calculate how many days I’ll have to work to pay for this harmless party.

Finally the time comes for us to light the candles, eat the cake, and open presents.  Another one of my gripes.  My kids don’t need any more toys, or clothes, or gift certificates.  There is no room left in the house.  I’m sure there is no room lefty in anyone’s house.  As the presents are opened I realize that these are the same presents that were given when my daughter attended a party last month.  And the month before.  Every child in West St. Louis County has an identical assortment of presents and clothes.  As a matter of fact, the parties are identical.  Fashions change from year to year: they have to, so that new presents have to be bought.  I figure that on January 2nd or so the word goes out to all children: these are the presents you must ask for this year.  And the parties.

We go back home.  For the movie.  There’s another stress.  Because this party is late in the year (November), all of the child appropriate movies have been played at prior parties.  I went through a list of fifteen movies from Blockbuster.
“No; Sarah had that one.  This one Julie did.  This one is from last year, dad.  Isn’t there anything better?”

I get frustrated.  I head for the “classics” section.  For sure they won’t know about a thirty year old movie.

I see one with a beautiful picture of a deer in front.  “The Yearling.”  I read the excerpt.  Child nurses a deer back to health.  Fantastic!  I rent the movie; I leave the store feeling like such a great dad!

OK; all of you.  I’m Puerto Rican.  I know little about classic movies.  I have no idea that once this child nurses the deer back to health it begins to eat and destroy this poor family’s crops.  The parents play along with trying preventive measures, but in the end they will starve unless something drastic is done.  You guessed it: the deer is shot by the dad.

One minute I had eight beautifully behaved, enraptured little girls watching a bedtime movie.  Once they show the dad leaving the house with a shotgun and once the loud bang is heard chaos broke loose.  Debbie, our smart, cute, very well behaved neighbor lost it.  She began to scream as if someone had slit her abdomen open without anesthesia.  She cried.  She banged on the carpet; she shook her head from one side to the other so much that I worried it would come flying off.

At first the classmates were supportive.  They tried to hold her hand, and to soothe her.  After ten minutes of this behavior they became worried, then panicky.  They began to cry.  Then to scream.

I tried to remain cool.

It’s only a movie, I told them.  More screams.  One of the girls wanted to know why the dad was being so mean.  Another one questioned my judgment as to why I had picked this horrible movie to show them.  I had lost control.

Debbie would not stop screaming.  I decided that despite this being one in the morning I needed to call her mom.  Our neighbor.  Who also happened to be our school’s principal.  I had to wake her up and tell her that I had just turned her exemplary daughter into an emotional basket case.  I begged her to please take her back.

Fortunately her mom decided not to chastise me for being such a horrible educator of children.  I don’t think that Debbie ever spent the night again.

Debbie married a wonderful man and is a very successful educator.  The last time that I saw her she was friendly and seemed glad to see me.  All of the children present that night have done well; most remain in touch with my daughter.  I did not learn my lesson.  Did you know about this other classic movie, the one called “Old Yeller?” 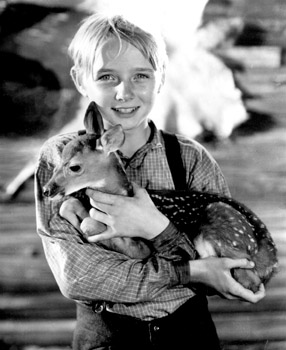 She’s Got a Way