There is no greater responsibility; there is no obligation as sacred as the one we accept when we decide to have children.  Except for the burden we willingly and foolishly take on when we allow our children’s friends to come over to our house to play, or to have dinner, or to sleep over.  This is over-the-top, complicated, very risky business.

Think about it.  We know our kids.  We have an excellent idea, when they cry, or complain, or just have a bad hair day, whether we should worry or not.  But when our kids ask us if Jeannie or Bobby can come over we have no idea whether we’re accepting responsibility for a little monster that is capable of setting fire to our house.  About the only part of old age that I find joy in is the fact that I’ll never have to deal with these strangers again.

I handled peanut allergies (thank God there was no gluten free in those days), asthma attacks, escape attempts, underage drinking, excessively skimpy bathing suits…  You name it.  Every single time that a serious issue came up, and they were frequent, I wondered why I had once again agreed to this visit.  I also developed a considerable degree of wonder and awe at how inadequate as parents was every other couple who lived in our neighborhood or sent their kid to our children’s school.

I have many stories to tell; I think Meg’s adventure came close to being the most traumatic.  She was close with my oldest daughter.  They went to the elite prep school; one of these places where you had to be not only frighteningly smart to get in: you also had to be willing to postpone retirement for a decade in order to be able to afford the tuition.

Meg was a nice kid.  When my daughter asked if she could come to her birthday party I accepted with enthusiasm.  She was slender, respectful, and smart beyond any reasonable measure.  She always wore very thick glasses.  One of these kids who began to read at age three and rarely stuck her nose anywhere except inside a book.

She was a pleasure to talk to.  History; literature; computers; calculus…  Everything came easy to her.  So serious and responsible that I would have left three newborns under her care, knowing that she’d look up all the answers and procedures long before she had to do the job.

When her parents dropped her off at our house I rushed to her side.  I wanted her opinion on some initiatives that I had read about; something to do with hunger and civil war in an African country.  Of course she knew what I was talking about.  I was disappointed when my daughter came into the room to ask me if I’d like to go out and play catch.

One thing I’m very proud of.  All of my daughters played baseball.  They can hit.  I was probably deficient in every other objective measure of what constitutes a good father.  But by golly, they were going to hit, and they knew how to catch a softball, and they did not, ever, throw a ball like a girl.  How else can one be sure that they would be successful in life?

We picked up a few gloves, and a softball.  Meg seemed eager to join when we mentioned playing catch.  Our neighbor across the street, a very capable and strong athlete, came along.  My wife completed the circle.

I gave the ball to my neighbor; he figured Meg was the guest (his sons practically lived in my house, and my son in his, so we were like family).  He tossed a normal throw in her direction; minimal arc; not much speed; nothing unusual about it.  Meg watched the ball all the way in; all the way in; all the way into her thick glasses, which were shattered.  The broken glass made a few cuts around her eyes and the bridge of her nose.  She made no effort; none; to lift her left (gloved) hand up in order to catch the ball.

She fell to the ground.  There was blood all over.  Of course she began to cry.  I ran to her; I bent over; I tried to clean her wounds.  I asked her if she was in pain.  She said not much; she just wanted to know why this man wanted to hurt her by throwing a missile at her.  Had she done something wrong?  She could not stop crying.

You have never played catch before?

“I figured maybe it had something to do with physics.”

Of course.  I should have known.  I’m sorry.

Once I got the bleeding stopped I went inside to call Meg’s parents.  She was going to need stitches.  I had to tell this wonderful couple that I had just disfigured their only child.

I arranged to meet them at the hospital closest to their home.  They were remarkably cool about the whole thing.  At one point I thought they were going to apologize to me for ruining my daughter’s party.  When I explained what happened they smiled and nodded: it was clear that Meg had shown an ineptitude for sports in the past.  They did not accept my offer to pay for the ER visit.

I drove back home in silence.  I could not figure out how it was possible that in St. Louis of all places a child could grow up not knowing how to throw or catch a ball.  I still don’t get it.

Meg did well.  She was not disfigured; you could barely tell there was a scar.  She went to the elite college, and had great success.  She has done well in her career.

My oldest granddaughter just started her softball season.  If I do nothing else for any of the grandchildren, I will make sure that someone has taught them how to catch a ball.  Forget about the elite schools: they’re overrated. 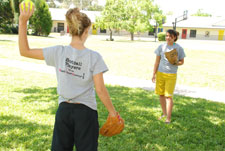