“You’ve got to be taught to hate and to fear,

You’ve got to be taught from year to year,

It’s got to be drummed in your dear little ear,

You’ve got to be carefully taught…

You’ve got to be taught before it’s too late,

Before you are six, or seven, or eight,

To hate all the people your relatives hate.

You’ve got to be carefully taught.”

-From the musical South Pacific

I was four, or five, or six, when I got my first pair of cowboy boots.  In those days westerns played the same role in children’s fantasies that Star Wars and monster laser beams play now.  I suspect more so for little boys than for girls.  I was thrilled.  I rammed those boots into my feet and ran outside as fast as I could, looking for someone to show them off to.  I spotted our next door neighbor, let’s call her Tammy, and I walked towards her trying my best to imitate the way I saw Roy Rogers and Hopalong Cassidy walk. I was beaming.

I waited a few seconds for her to say something.  It was clear (to me) that there was something great; spectacular; unusual in my appearance.  She did not seem to notice.  I was irritated by her lack of insight.

Don’t you see my new boots?

They’re real cowboy boots.  They’re the same boots that they use to track down bank robbers.

She began to laugh.

What do you mean?

“You’re Puerto Rican.  You’re not a cowboy.  You look stupid.”

One thing led to another.  I may have called her a snot-nosed brat, and I’m sure I said something about how ugly and useless her beloved dog was.  She said something about my sisters; someone pushed somebody first; she hit me, and it hurt (she was a few years older than I was); I ended up kicking her in the shins as hard as I could with my new robber-chasing boots.  To my surprise, she began to cry (in earnest; she was known for manipulating people with her whines) and ran home.  I went back inside and thought nothing of it.  I may have told my mom that Tammy had been mean to me; I don’t remember.

A half hour passed.  Tammy’s mom knocked on our front door.  Through the closed door she said something about wanting to see if I was OK.  When I opened the door she erupted into our house, followed by Tammy’s three older sisters, with Tammy staying a respectable distance from the reach of my boots.

All I remember from then on is chaos.  Tammy’s mom calling my mom a cheap woman.  My mom telling her what a rotten child Tammy was.  My mom finally bending under the weight of four women screaming at her.  She began to cry.  My two older sisters and myself also crying, huddled around my mom; scared that this had escalated.  They left, and things were never the same.

My dad was out of the country at that time.  Tammy’s dad, also a college professor and a calm, very reasonable person, was not around.  He wrote a column in one of the local papers; he was well known and better regarded.  One of his earliest columns had been about children and how they carried the hope of the world in their shoulders.  He had used me as an example of why he thought the world would improve.

They were close friends, and they spoke about politics, or history, or the world in general on an almost daily basis.  They could not get their wives to give up the grudge.  We descended (and I mean descended) into a daily cold war that hardened our souls and made it increasingly difficult to talk rationally about the conflict.

Tammy made a point of crossing over our lawn when she came home from school every day.  Head held up high, as if the people sitting in the balcony right in front of her did not exist.  I made a point of rounding up my friends, some of whom were crude and rowdy, to hover around her walking her dog so that they could say bad things about it.  Our fathers continued to talk almost every day; in retrospect I think that I could see sadness and regret in their eyes.

This went on for many years.  Two next door neighbors with a lot in common; two very decent, impeccable households with young children that had everything to gain from sharing happy and sad occasions were intent on disliking each other.  Then two things happened.

My baby sister was born.  She was what we now call a surprise (I know this now; I had no idea then).  And Tammy’s dad died suddenly and unexpectedly.  I remember an ambulance coming to her house late at night; the next thing we knew the university bell tower was tolling (something it did whenever faculty died).

There was of course a wake next door, and hundreds of people coming through to offer help and consolation.  We stayed away that first day.  In the evening Tammy, her sisters, and their mom were sitting in their balcony (in those days of no air conditioning many people were outside in the evening).  My mom dressed up my baby sister in her finest outfit.  She gave her to me.

“Walk over next door.  Ask Tammy’s mom if there’s anything we can do.  Tell her that you wanted all of them to see your new sister.”

I was flabbergasted.  I gave her a look, not of disappointment but of lack of understanding.

“This has gone on long enough,” she said.

I walked over, holding on tight to my sister.  They did not give me a chance to say anything.  It was all cries of joy and celebration.  They made me sit down.  They took turns rocking my sister.  They asked me to go home and fetch my mom and my other sisters.

It was the beginning of a beautiful friendship.  I can recall dozens of evenings sitting in their balcony, laughing at my sister’s baby antics and talking about anything and everything.  When we moved to a new house I always made it a point to visit; even after I left for med school Tammy’s house was one of the first places I came back to.  I still keep in touch with her.

Grudges.  They always begin with disagreements that should not be that hard to settle.  But…  When things don’t go exactly our way we throw compromise out the window.  We become angry, and we teach our children to fear and hate the people who failed to take our viewpoint seriously.  It becomes much more tragic when the source of the argument is religion.  The same people who profess to believe in the existence of a merciful god have no trouble ordering the slaughter and humiliation of millions of their fellow human beings.  Shiites and Sunnis; Catholics and Protestants; Hindus and Muslims indiscriminately kill each other because this is what they were taught to do.  Educated people who would not hesitate to help a beggar in need have violent gut reactions when they’re asked to understand where the other side is coming from.

Today’s Catholic lesson was about the resurrection of Lazarus.  The Gospel says that he lay dead for four days before Jesus ordered him to rise.  Maybe because of my medical training, maybe because my dad was a bit of a skeptic and he brought me up this way, I have a great deal of trouble accepting resurrection stories on faith.  I don’t understand why it’s necessary to invoke miracles in order to get people to accept the principle that we should work hard to raise our families and to help each other out.  If we eat well and exercise we significantly reduce the chances of our needing a miracle sure.  If we make sure that our kids are educated and we treat them with love and kindness, we make sure that they won’t have to depend on the miracle of a winning lottery ticket.

Maybe we should approach resurrection as the rebirth of our love for each other.  Maybe when we reconcile with estranged family and friends we’re celebrating a miracle; a rebirth; a new beginning.  Maybe this is what’s supernatural in the miracle stories: it’s never too late.

We have a chance to make something beautiful out of our lives.  Do we really believe?  Are we going to make that phone call?  Now? 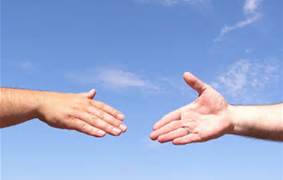